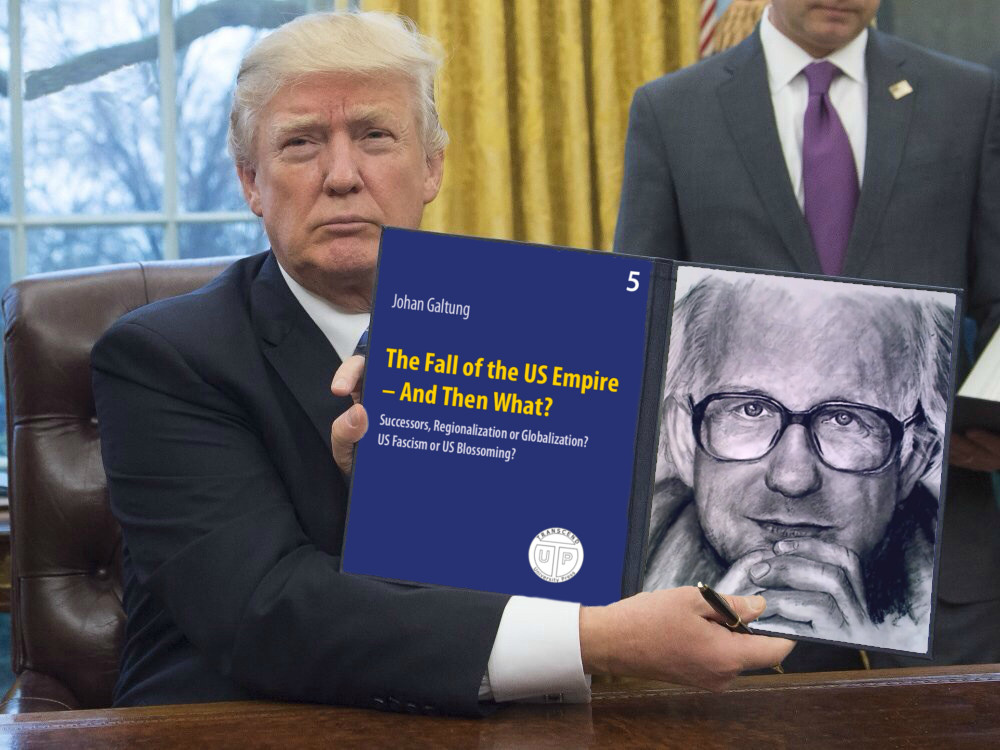 THE TRUMP PRESIDENCY: AFTER THE FIRST WEEK

In Prof. Galtung’s rather timely book “The Fall of the U.S. Empire — And Then What?” he spells out his prognosis for the conditions under which the US may either blossom as a republic or experience the demise of its global empire.

Trump’s deeds: Attacking the Affordable Care Act; the “global gag rule” against abortion; the federal regulation and hiring freeze; canceling the TPP; restarting the Keystone XL and Dakota Access Pipeline; limiting entry with the Mexican Wall; the 90-day travel ban on seven countries; more undocumented people prioritized for deportation; no federal funding for cities refusing to cooperate; communications blackout from federal agencies; Guantánamo torture continued–What does it add up to? A very strong white state centered on a president with absolute power and control over life (birth) and death (care) of the citizens. Not regulating police racism. So far, no order on the military. Fascism? Too early to say; but in that direction. It opens for questions about the inner workings of Donald J. Trump. Who is he?

This column early on saw Trump as suffering from “autism”, living in his own bubble, speaking his babble with no sense of reciprocity, the reaction of the other side. The column stands by that.

However, this column drew a line between his words and deeds; denouncing his rhetoric as grossly insulting and prejudicial, but pinning some hope on his deeds. Wrong, and sorry about that. After one week, Trump clearly means every word he says, and enacts them from Day 1; even what he once retracted in a New York Times interview.

Combine the two points just made: autism and immediate enactment. He acts, and from his bubble does not sense how others will react, and increasingly proact. He assumes that others will accept his orders, obey, and that is it. It is not. His orders my even backfire.

As many point out, terrorism in the USA after 9/11 is almost nil. But his actions may change that. Some Mexicans may hit back, not only against the wall but the border itself, drawn by USA grabbing 53% of Mexican territory in 1846-48, then soaking Mexico in debt and violence importing drugs and exporting arms, even unaware of the harm they do.

Imagine them reacting by cooperating, learning from China to raise the bottom up, starting building a West Asian community with links across the Red Sea, and “Saudi” Arabia soon joining?

As a minimum, the 7 might reciprocate and block US citizens’ entry for the same period. How would that affect US military operations? Would it force Trump to use force? In fact, are his demands on other countries so extreme, not only in words but in deeds, that there are no more words and deeds left short of force? Does his extremism limit his range of options, making war as probable as under Hillary Clinton?

And yet what he has done so far, firing and backfiring, is little relative to what other US presidents have done of harm.

They caused devastation of Japan, of Vietnam and set back Africa on its way to freedom, autonomy, independence. Trump is retracting, contracting, away from others, but not expanding into them. So far.

The reaction inside the USA has been from judges challenging the legality of the orders and launching court suits. The market has been ambiguous but generally down with heavy protests from Silicon Valley. Trump claims the orders are working. What else will happen?

It is difficult to imagine that there will not be a CIA response, being challenged and provoked by Trump, not only for accusing Russia of intervening to his advantage. There are probably at this moment countless meetings in Washington on how to get rid of Trump. Yet, he has command over not only his Executive, Congress and the Supreme Court, but also over the overwhelming number of states in the union. US presidents have been assassinated before Trump when the forces against are sufficiently strong. Could somebody from the Travel ban 7 be hired to do the job, making it look as a foreign conspiracy?

Another and more hopeful scenario would be nonviolent resistance. Difficult for border officials. But inside the USA people to be deported may be hidden, protected by their own kind and by others–with care though, Trump also has some good points. More constructive would be alternative foreign policies by cities, at present not by the federation, nor by most of the states. Reaching out to the seven and above all to Mexico for dialogue; searching for better relations than at present and under Trump. Preparing the ground for something new, under the Democratic Party or not. Not a third party, impossible in the USA it seems, but as general approach. The relation between New York and Baghdad, Tehran, Damascus, Tripoli, Khartoum, Mogadisciu and Sana’a as an example. Still some space!

There is no greatness in what Trump does, he makes USA smaller. Trying rebirth instead of rust, canceling stupid deals like TPP: OK. But retracting into a self-glorifying strong state is not greatness, it is isolation. Greatness is not in what you are but in how you relate. And Trump relates very badly.

Johan Galtung’s article originally appeared on Transcend Media Service (TMS). His book The Fall of the US Empire and then what? is available here.

Also read the transcript from the Democracy Now dialogue between Amy Goodman and Prof. Galtung.

AMY GOODMAN: We turn right now, in the last few minutes, to a man who has spent the last half-century pursuing nonviolent conflict resolution. He’s known as a father of peace studies. His name is Johan Galtung. His latest book, The Fall of the US Empire–And Then What?: Successors, Regionalization or Globalization? US Fascism or US Blossoming?

We welcome you to Democracy Now!, Johan Galtung. As you survey they geopolitical landscape right now and the wars that the US is involved with, what are your thoughts?

JOHAN GALTUNG: Well, thank you so much for inviting me.

It’s an empire against a wall; an empire in despair; an empire, I would say, in its last phase. My prediction in the book that is here, that you mentioned, The Fall of the US Empire–And Then What?, is that it cannot last longer than ’til about 2020. In 1980, I predicted for the Soviet empire that it will crack at its weakest point, the wall of Berlin, within ten years, and it happened in November 1989, and the Soviet empire followed. So my prediction is a similar one for the US empire. And that could lead to the blossoming of the US.

AMY GOODMAN: Why do you say ten years, that the US empire collapses in a decade?

JOHAN GALTUNG: Within ten years — well, the prediction was made in year 2000, and I actually said twenty-five years. But then Bush was elected president, and his narrow vision, his fundamentalism, made me cut it by five years, because I saw him as an accelerator, which he certainly did, launching three wars — war on terrorism, war on Afghanistan and war on Iraq. Now, this comes after the US did not win 1953 in Korea and lost 30 April, 1975 in Vietnam. In other words, we are now in war number five of major significance. That is typical for the decline of the empire that it goes like that. When you ask me why did I have that time horizon, well, I made a comparative study of quite a lot of declines of empires. I’m a little bit of an expert on that, actually. And there are certain factors that are similar. They rise and decline more quickly now. Of course, the two Roman empires, the Western and the Eastern, lasted longer. Now it’s quicker. The US started, I would say, in 1898, walking into the shoes of the dying or dead Spanish empire. And we are now dealing with a phenomenon which is about 110, 112 years old. And as I told you, I put the upper limit at 2020.

AMY GOODMAN: When you ask “And then what?” you say “US fascism or US blossoming?” What do you mean?

JOHAN GALTUNG: What we see right now is an intensification spreading, special forces increasing, let us say, from thirty to forty-five countries. And that’s exactly what you would expect. It’s an effort to try to externalize, to say that there are enemies abroad that are trying to get at us, instead of saying the obvious, namely that we have made a construction, and that construction is dying itself. If you try to dominate the world economically, militarily, politically and culturally at the same time, and then having these four support each other, it cannot last for a long time. And that’s the phase we are in now. Now, in that period, there will be fascist reactions. It’s not impossible that it could be a military coup in the US from the right, not impossible within this period. But, you see, I am much more optimistic than that: I think that the US is in for a blossoming period. Look at what happened to England when it got rid of its empire from 1965 on. Russia got rid of its empire from 1991. They took some time. There was a bad Yeltsin period. Right now Russia is rising. You see the same in France. You see it in Italy.

AMY GOODMAN: Johan Galtung, we’re going to break now and bring our viewers and listeners part two of our conversation this week. Johan Galtung is known as the father of peace studies. His latest book, The Fall of the US Empire–And Then What?

2 thoughts on “THE TRUMP PRESIDENCY by Prof. Johan Galtung”