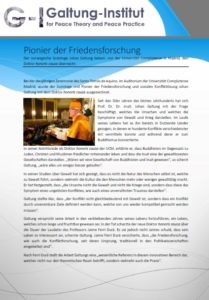 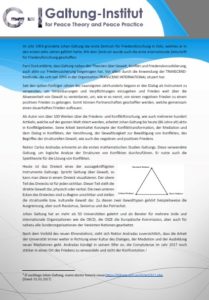 Dear Rector, dear Jury–I receive this great honor bestowed upon me in deep gratitude and pride, promising to try to live up to it.

I will now share with you some words about how I got launched on the track for which you honor me, peace studies and peace practice.

Like so many, I felt desperate about the wars in our enlightened century and continent and asked, Why? What can we do to avoid this suffering, not only the wounded and dead, but the countless bereaved?

From my family I knew a little about health studies and had been struck by the fruitful distinction between cause and symptom.  The symptom is on the surface of the body, like fever; but the root cause is deeper down, inside, a sepsis.  A major breakthrough.  “Treat the cause, not the symptom” became a new rationality.  Cooling the body makes some sense, but cure it is not; and even less treating a swollen ankle that could be a symptom of a serious heart illness.

My illness was war, my wellness was peace. Was war a cause with horrible effects with nobody really winning, or could war be a symptom of something deep down in the “body politic”, a “root cause”? Of something preceding war and violence in general, which if removed would also remove, or at least reduce, war and violence? But what?

This was important because if we accept violence as the root cause then we link it to the human body or humanity as such, not only as innate, but as inevitable.  We would have to learn to live with it and with its effects, some of them summarized in “war breeds war”.

War rhetoric actually pointed in two directions: “someone blocking what we are entitled to” and “revenge for unjust wars against us”. The first points to conflict, “incompatible goals”; the second to trauma, “wounds from past violence”.  I have stayed with those two.

This liberates human nature from being the cause and gives us something that peace practice can do: solving conflict, conciling trauma.

Easily said.  But not so easily done. Let us look at some cases.

Starting with conflict: a party has a goal like the territory in the Andes between Peru and Ecuador and the other side has exactly the same goal.  Incompatibility, hence conflict.  Why pay attention to the goal of the other, particularly when being much stronger? I go for my goal, I hate that other side for blocking me, get out of my way.

Strong arguments.  The only way out would be by showing another possibility, called a “solution”; might be better than even victory.

This can only be done by making some forecasting, prediction, prognosis.  One negative: what happens if you, the stronger, proceeds with violence, war, and wins?  And one positive: what could happen if you choose a nonviolent course of action, like sharing that territory in a “two-state zone”?  With a natural park, a market?

For the negative prediction a dialogue is needed, asking the strong party to predict what will happen.  Sooner or later “revenge” comes up, his violence having caused the other side’s trauma. He may say, I can handle it.  OK, but that means victory with a cost that over time may become considerable.

Hence the positive vision; owning the zone together, sharing the benefits equally, 40-40, setting aside 20 for ecology-administration.

Inside the strong one there is a thought: “Access to the whole zone is good, but not enough. I want to be the sole owner”!  Yes, a cost. This is where comparing the two forecasts enters, benefits and costs. The mediator should watch out, exaggerating neither one nor the other.  But the empirical experience is that if the vision of a nonviolent outcome is sufficiently attractive, that may be preferred: “OK, not exactly what I wanted, but maybe better than all the trouble connected with a war and its aftermath, even if I win, for sure”.

And thus it is that we may now be heading for some fisheries sharing in the South China Sea between China and ASEAN–Philippines.

And maybe even between China and Japan, as my Japanese wife and co-mediator Fumiko Nishimura and I will try in a coming conference in Nanjing.  A contested island like Sensaku-Diaoyu may be shared, but there are also very traumatic 4 centuries + old past to consider.

Trauma.  Let us take an example closer to Spain, from Italy.

In 1911 Italy committed a terrible genocide in Libya–state terrorism we would call it today–from above: bombing oases, the areas for women, children, the old and the sick when men, Bedouins, were fighting on horseback in the desert. To the Arabs-Muslims this unheard of brutality was Satanic. They capitulated and Libya became an Italian “colony”.

To be liberated by Gaddafi in September 1969, dethroning the Italian puppet, the King.  However, 1911 continued festering, as usual: trauma is easily forgotten by the perpetrator, but by the victim: never.

2011 was coming up and I had been arguing in Italy in favor of an apology at the centenary.  And that is exactly what happened: Silvio Berlusconi apologized.  Great; it cost something psycho-politically. And Italy has not been exposed to Islamic State violence.

There is a nice metaphor: The victim says, “let us open a new and blank page in our relation.  But I’ll watch you: nothing of your old violent manners!”  Other Europeans, England-France, Denmark-Norway did not live up to that, bombing Libya in 2011*.  Particularly England-France will have to open a new book, not only a page.

And the USA, having killed more than 20 million in 37 countries since World War II? A new library is needed, with blank pages.

11 of the EU members–when they were 28–were colonialists, 9 of them in Africa; with much action they wish not having done and want undone. Yet, not having the moral courage to do so.  So far.  That may change.

Islam might consider that they were not invited westward into the Iberian peninsula, however golden the age they produced.  The Crusades were also a response, a revenge. Major themes for a near future.